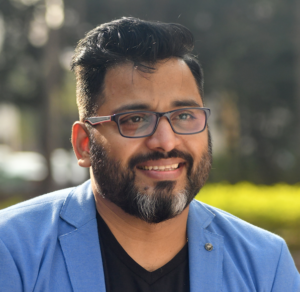 As the Founder and CEO of Rich Minds, Ravi is fondly known as a Mind Architect amongst his colleagues, friends, clients and fellow beings. As a CEO, he defines his role as someone who is responsible for Creating Extraordinary Outcomes (CEO).

Ravi served the United States Government for 14 years and another 16 years in the private sector. These 30 years, provided him ample opportunities to interact with people from different origins, cultures, belief systems, traditions and mindsets.

Empowering people to build, grow and positively transform their lives and businesses with ease and joy, is what Ravi considers an rewarding experience. His unique, creative style of coaching has benefited some of the most reputed organizations and individuals across the globe.

He mastered the art of coaching using advanced Neuro-Linguistic Programming (NLP), and International Coaching Federation certified coaching tools and he is also an alumni from the prestigious Indian Institute of Management, Lucknow.

He translated his learnings into a book titled ‘Weekend Miracle’ and the love of an appreciative audience turned it into an Amazon Best Seller. ( https://bit.ly/Weekend-Miracle )

His obsession with the science behind the human mind led him to pen a rap song titled ‘Mind Body Affair’ which bagged the Bronze Medal at the Global Music Awards in 2019. (https://bit.ly/Mind-Body-Affair-by-Ravi-Nair )

Ravi was conferred several awards during his career spanning 30 years, and some of them are:

Ravi juggles between his multiple businesses in India. He is on the board of two companies namely Teamedge Services Pvt. Ltd and Guardwell Prime Services Pvt. Ltd (www.teamedge.in), which is India’s premier Staffing & Security Company.

Besides this, Ravi is a very active and Associate Member of United States Indian Importers Council (www.usiic.in ), a platform which facilitates US-INDIA Trade.

He says, “I will not build roads for you, but I will build you for every road”, and that’s why he is fondly known as a Mind Architect, as he helps people build, design and create the life, they desire.