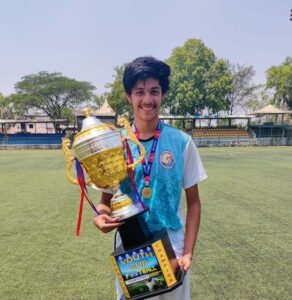 Ajinkya is a junior college student from Mumbai, India. Having spent his early childhood in London, Ajinkya developed a very keen interest in motorsports and football from a very young age. He started with electric karts at 3 years and at 4 years he was training at Rye House Speedway in the UK. After relocating to India with his family he continued to follow his passion despite the limited facilities available in India for motorsport. He became ‘the youngest Indian ever to participate in competitive motorsport’ when he participated in the JK Tyre Rotax Cup in 2011 at a age of 7. He ranked 8th overall in the championship.

In a sudden twist of fate Ajinkya had a sudden spurt of growth which made him very tall for his age. This made it difficult for him to fit into karts in his age group, making it difficult to continue.

Instead of giving up, Ajinkya redirected all his efforts, skills and focus into his other passion, football. He quickly became the captain of the school football team and excelled in the school level league. He plays in the central defender position. He was noticed by big clubs (India) and has played in the under 15/ under 18 category for Football School of India and Mumbai City Football Club(MCFC) . He is also an accomplished state level handball player.